'Not Good Enough' for a Rainbow

A Facebook friend posted this yesterday and it's caused a stir of comments. It's a one-man tirade about why straight people should not use the rainbow in their profile pics.

Allies, like the friend who posted it, and me, felt hurt. Maybe it's just the added stress I've been under lately, but it literally made me cry. Wonderful friends rushed in to tell all of us, "Don't listen to this jerk!" They showered us with all kinds of love and assured us that any and all support is greatly appreciated and needed, but, like I said on another friend's beautiful rebuttal, it's like a 1-star review: you know you shouldn't let it get to you, but, for whatever reason, it's a little louder in your head than all the positive ones.

Every time someone writes a blog post about how straight allies aren't 'doing it right', it upsets me. There's no handbook for this. Help us to do it better, but don't criticize the very people who want to help you! It's like being hit with friendly fire.

So, today's a new day, but this fucking article is still bothering me - and not just for the obvious reasons. It's making me mad at myself that one lousy person saying hurtful things (about me and others like me) is still upsetting me. Am I really that thin-skinned?

Then it hit me - this type of stuff is what the LGBTQAI people hear and read on a daily basis - and this week there's been a ton of it. It's not just one hateful post, it's hoards of them - and, you know what? I now get where the feelings behind this post came from. And to take it one step further - this was just one article written by some dude I'll never meet or probably even pass anonymously on the street. I'll never have to worry that his words of hate will manifest into physical violence on me or the person I love. It's such a little, tiny, scratch on my psyche - one that will probably be healed by tomorrow.

In a strange twist of irony, I now think he's right - even though he's hurt my fragile little feelings. It's one more thing I understand just a little better than I did before.

So, to all my LGBT friends - especially the kindest and gentlest of you - I can't imagine what it must be like to read mean and hateful shit about you. Every. Single. Day. It definitely sucks to be told you aren't good enough - even if it's just for something as insignificant as painting your profile pic with a rainbow. 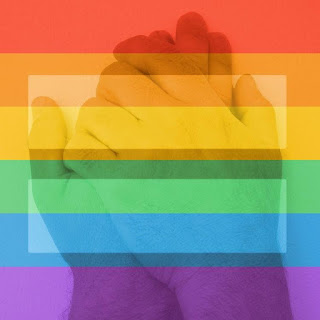