Flash Fiction - Up and Away 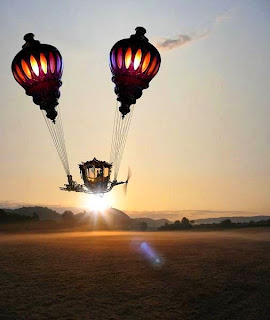 “Are you sure this thing is safe?” Walter fidgeted in his seat.

“Yes! Yes. Completely safe,” the man in the fancy suit and top hat swished his fingers dismissively in Walter’s face. “Are you ready? Away we go!”

Walter’s heart pounded as the roar of the fire inside the orbs suspended above them grew louder and the carriage shuddered and lifted. For just a moment, it bumped the ground and re-settled. The urge to jump was overwhelming, but Walter’s brief hesitation cost him his only opportunity at escape. They ascended rapidly and within seconds they were too high for Walter to jump.

“Wait!” he shouted. “I want to go back.”
“Sorry. There is no ‘going back,’ the man said. The steam engine on one end of the frame fired up, followed by the whir of the giant propeller behind them. “The motor will boost us into the jet stream. Once there, we’ll only need the lamp-lifters. Walter craned his neck out the window to look at the glowing orbs straining above their ornate carriage.

“What if those cables break?”

The man laughed. “Such a practical boy. Where’s your sense of adventure?” His eyes glowed as bright as the flaming bubbles pulling them higher and higher into the heavens. He looked so familiar…. At that moment, the engine sputtered and died and the propeller slowed. Walter leapt to his feet.

“Sit,” the man said calmly. “We’re high enough. We no longer need it.” Walter perched on the edge of the bench seat across from the man and tried to relax. He glanced up and the man smiled at him. “You might want to enjoy the view, Walter. It really is a beautiful evening and this will be the last you see of your home. You might want to take a look while you still can.”
“What do you mean ‘the last I’ll see of it’? Who are you? Where are you taking me?” He was frightened and began to cry. He wanted to go home. He wanted to see his mom and dad. He even wanted to see his stupid little sister, Angelina.

“Remember telling your family you never wanted to see them again? Well, I came to rescue you from them. As soon as we get to where we are going, the child version of you will be no more. You’ll be the adult you’ve always wished to be. Every decision will be yours to make. No more parents to tell you what to do or little sister to annoy you. Isn’t it wonderful?”
“No!” Walter screamed. “Take me back! I don't want to be an adult! I want to go home!”

The man leaned forward and took Walter by the shoulders and shook him. “Walter! What’s wrong? Walter!” He shook harder. Walter blinked and suddenly, the man became his father.

“Walter! Wake up! You’re having a nightmare!”

The young boy looked around the bedroom - at all the familiar trappings of his childhood. He buried his face in his father’s warm chest and sobbed.

Email ThisBlogThis!Share to TwitterShare to FacebookShare to Pinterest
Labels: FlashFic