Not A Single Word

I wasn't planning on ever posting this, but after having to go through my entire Blogger history trying to find an accidently deleted scheduled post, I've learned my lesson. Pages are MUCH easier to recover if they've actually posted, so therefore, I'm posting this - if for no other reason than I just don't want to lose it.

These two characters need to stop talking to me!  Or maybe I need to stop everything else and start listening to them.

I had ZERO intention of doing a story for this Flash Fic picture.  ZERO!!! I have way too many irons in the fire as it is.

But they won't shut up.  I don't mean the guys in this picture - I mean my homeless guys, Tommy and Shane.  These guys are just actors, acting out a scene from Tommy and Shane's story, which is below. 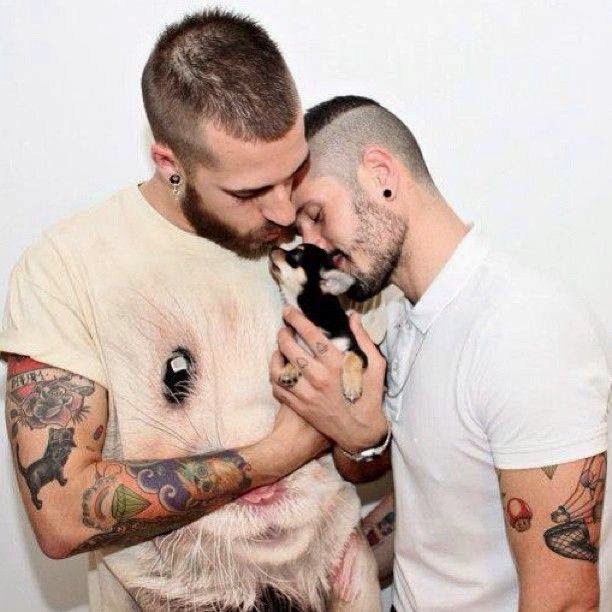 Not A Single Word

“If he hadn’t whimpered, I’d have passed right by him.”

Shane couldn’t stop gazing at the tiny creature trying to wiggle out of Tommy’s big hands. Tommy had found the pup in a trash bag next to one of the retail plaza’s big dumpsters. Shane rested his head on Tommy’s shoulder and nuzzled his nose into the puppy’s warm fur and hummed.

“He has that puppy smell, doesn’t he?”

Shane hummed again and nodded. He lifted his head and looked at Tommy.

Shane smiled. Tommy always knew what he was thinking. It was one of the reasons he loved Tommy so much. Shane abhorred talking because of his stutter, but with Tommy, talking was seldom necessary.

Shane had never had a pet but he’d always wanted one. What kid didn’t?  He heard the remorse in Tommy’s tone, though, and knew it killed him to tell him ‘no.' As much as Shane wanted this dog, he wanted Tommy to not feel bad even more. He forced a bright smile and nodded his understanding.

“I mean, we can barely feed ourselves, you know that.”

“And what if he’s a barker?  We can’t take that chance. We can’t draw attention to ourselves.”

“And what about when winter comes, huh?” Tommy’s voice rose with intensity. “What if we have another winter like last one and we have to go to a shelter just to stay alive? What would we do with him then? We couldn’t just leave him and we can’t take him to a shelter!”

Shane would rather die than spend a night in a shelter anyway; he hated them, but he simply bobbed his head as the puppy continued to nuzzle Tommy’s beard.

“I wish you wouldn’t argue with me about this, Shane. I mean, I’d like to keep him too, but we just can’t.”

It would take way too much effort to tell Tommy he hadn’t said a word. Instead, Shane occupied himself by taking the pup’s paw between his fingers and studied how tiny and soft it was. He practically jumped out of his skin when Tommy huffed disgustedly and shouted.

“You’ll have to be the one to train him then! It’ll be totally up to you! He better not piss in the tent, either! And you damn sure better make sure you clean up after him outside, too! I don’t wanna’ be stepping in dog crap if I have to take a leak in the middle of the night.”

Shane looked up at Tommy's angry face  and smiled.  Tommy’s brow unfurled and he visibly melted for a second before regaining his gruff demeanor.

“I hate how you twist my arm, Shane. I think this is a huge mistake, but we’ll try it your way. If it doesn’t work out, the dog will have to go. I don’t want to hear a single word out of you.”

Check out the other great stories for this picture here.
You know... ones that actually involve the two guys shown.
Posted by Unknown at 12:57 PM