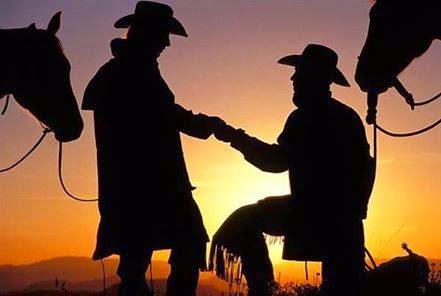 Mason brought the big horse to a halt.

“Let’s stop here for a minute.”

Luke pulled his stallion up as well and studied his friend as they both dismounted. They were headed back to the ranch, the glow of the setting sun casting long shadows on the dry ground. They had a ways to ride before reaching home and it was unlike Mason to risk losing daylight to watch a sunset, but then, he'd been acting odd all day. They’d spent the entire day together—just the two of them—it'd been Mason's idea, yet he'd been distant and quiet the whole time, even more than usual.

“Amazing sunset,” Luke said, and smiled as Mason took his hand.  Mason didn’t answer but Luke saw him nod in the amber light. "Thanks for today, Mace. I really enjoyed...."

Mason cut him off. “Would you... would you marry me, Luke?” His voice was gruff and low but Luke heard him perfectly. The problem was, he couldn't believe what he heard. This was Texas. There was no way in hell Mason would actually propose. Luke chuckled.

“Would I?  Obviously, the use of the word 'would' makes this a hypothetical question. Otherwise, it's not really fair, because you'd know my answer ahead of time—you know, before you properly asked.”

“Jesus, Luke,” Mason growled as he turned to him. Their gazes met and the intensity in Mason's blazed back at him.

Oh. Oh! Luke’s heart froze and his breath caught as Mason sank to one knee, his gaze never leaving Luke's. This time it was barely a whisper.

Luke looked into the blue eyes he’d known forever and bit his bottom lip, trying not to grin. He wanted to kiss Mason so bad right now. Instead, he smirked.

“Gosh, I don’t know. Someone once told me I shouldn't say yes to the first boy that asked...”

“No other boy better ever have reason to ask you that," Mason grumbled.

Mason fumbled in his pocket for a moment before producing a black box with his free hand. He flipped it open with his thumb and Luke gasped.

Luke looked at Mason and in that moment he saw the six-year old boy who'd smiled up at him so shyly the first time they met. He remembered The Sacred Blood Brothers Ceremony where they'd bravely mixed their blood together and vowed to be brothers forever—like these rings: the two of them, side by side, always and forever.

Luke smoothed a stray lock of hair from Mason’s eyes. “There'll never be anyone else, Mace. You’re my first, my last, my only. Yes, I would love to be your husband.” A thought occurred to him and he couldn’t resist adding, “It is husband, right?”

Mason laughed and pulled Luke down, into his arms. “Yes, Luke. Husbands.”

Luke kissed him before looking into the only eyes he ever wanted to wake up to and said, "The Sacred Husbands' Ceremony, huh? Yeah, Mace. Let's do this."

When this picture got posted on the Monday Flash Fic page, I immediately knew the scene - I'd written it. It's from book two - the sequel to my novel. The setting was a little different, but this is definitely Mason proposing to Luke. I pulled up Scrivener and, yep... found it. A little tweaking is all it took. I ended up cutting two hundred words and changing a few others, but... yeah, it was written awhile ago.

I had fun spending a little time with Mason and Luke again and I'm thinking I like this setting better than my original one anyway, so, for now, anyway, it's a permanent part of book two. Now I just need to finish book one and get it submitted.

Pretty sure that was Helena's plan when she posted this picture anyway. ;o)

Check out everyone else's 'take' on this picture. Links can be found on the group page.